The muscular Mercedes-Benz G63 AMG 6×6 created a series of sensations all over the world with its debut at the Geneva Motor this year and for now the company has revealed all details and specifications about this car. The mighty beast churns out its power from a twin turbo charged 5.5-litre V8 engine that delivers maximum power output of about 544 bhp of power to all its six wheels.

Mercedes has built the vehicle on the same platform it uses to build vehicles for Australian army. So, such a platform will help the vehicle to make its place among the best off-roaders with superb refinement.

Five differential locks, 6×6 drive, 544 bhp of power, low range ratio, tire pressure control system, portal axles and specially designed chassis allow this pickup to make its own roads where the mobility concepts just disintegrates once the vehicle runs out of road. Thanks to the interior increments from the house of AMG, commuters can enjoy comfort even when the vehicle is busy making its way through the worst topographical and metrological scenarios. 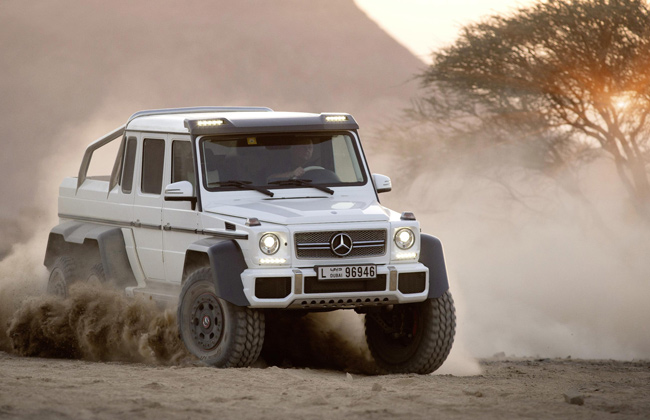 The interior has been updated with the contemporary dashboard that hires impressive instrument cluster and a large central display. The robustness and practicality can give a new edge to the off-roading as the vehicle inherits the traits from both the military and civilian G class vehicles. The Mercedes-AMG combination has really paid off with this vehicle; the luxurious interior and superior engine technology.

Despite being equipped with the unique drive technology the vehicle doesn’t really hires anything new in terms of development. After the continuous production of G Class for about 34 years, a large array of the G series parts allows the new G 63 6×6 to put in almost exclusive parts produced for the G series.

The interesting part of the vehicle is its drivetrain; the AMG V8 Twin Turbo engine with the 400 Kw (544 bhp) of power and highest torque of about 760 Nm. The front drive system and a rear twin drive system have been paired with the AMG SPEEDSHIFT PLUS 7G-TRONIC auto transmission. The twin rear drive system has already shown its reliability with the Australian Army. Other than this the ingenious portal axles are also making its debut first time in any civilian vehicle.

The chassis is basically based on the current production model and the only difference is the dampers and helical springs that have been adjusted to suit the changed characteristics of the three axle model. Even for the springs, engineers were able to fetch unique G series parts that contain about 15 different spring rates.

The front axle has inherited the spring from the armored special protection version, the first rear axle is equipped with the harder spring rate and the second rear axle comes with a softer one. Together the setup is quite proven, the adjustable gas pressure shock absorber provides a perfect blend of dynamism and comfort on or off road.